Explore the Mansions & Castles of the Thousand Islands Region 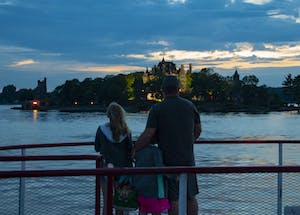 As you begin to explore the Thousand Islands, you will quickly notice an incredible quantity of sprawling mansions. For centuries, the region has been a popular summer escape for wealthy families. Instead of relying on hotels or vacation rentals, many of these families built elaborate summer homes on privately-owned islands along the St. Lawrence River. Around the turn of the century, this collection of island homes came to be known as Millionaire’s Row, or Millionaire’s Colony. While some of these homes appear quite modest, others boast as many as 30 or 50 rooms, and feature enormous in-ground pools, basketball courts, small theaters, bowling alleys, and more. While some can be spotted from the mainland, the best way to catch a glimpse of the opulence is on a St. Lawrence River boat tour. The next time you’re in Alexandria Bay, hop aboard a ship and cruise along the river to find these famous millionaire dwellings.

Located on Cherry Island, the green Twin Pine home was once half of a perfect pair. Built and owned by Nathan Strauss and Abraham Abrams, co-founders of the A&S Department Stores of New York City, the mirror image homes were an ode to the twin sisters the men married. Sadly, the friends & business partners were separated by tragedy. Abraham suffered a Heart Attack and passed away on the Island; Strauss’s brother was on board the Titanic, a loss that changed him forever. In spite of this Abraham’s son and Strauss’s daughter married and turned the remnants of the A&S department store into what we now know as Macey’s Department Stores. Unfortunately, only one of these magnificent homes remains today. What came of the demolished house? The foundation was repurposed into a massive in-ground pool!

Also on Cherry Island lies Casa Blanca, a very appropriately named white home. It was built in 1892 by a Cuban Sugar Plantation Owner and boasts an incredible 26 rooms, most of which still contain original period furnishings, including one of the first player pianos. The grounds also feature an unusual seawall decorated with lions, dragons, and gargoyles. The gargoyles, which face Canada, were placed on the wall during Prohibition to ward off evil spirits or alcohol from sailing in with America’s northern neighbors. To ensure the message was clear, signs once hung around the gargoyles necks reading “Keep me dry.”

Also known as Artificial Island, Longue Vue Island is the only man-made island in the region. It was built in the late 1800’s by Mr. Hudson P. Rose from Cleveland, OH, for his extraordinarily picky wife. After she was unable to pick an island to purchase, Mr. Rose gave up and built one he thought she would enjoy. Atop the new island he also built a new home, complete with a green and stone boathouse. In the end, it still was not enough. Mrs. Rose decided she didn’t like the house, the island, or her husband and she left all three. The island eventually sold for $450,000 to a family from Phoenix, AZ.

Castle Rest is a beautiful stone home on Pullman Island. While few people are well acquainted with the island’s owner, famous inventor George Pullman (he invented the sleeper style railway car), his 1872 summer guest is a household name. For a week, former President Ulysses S. Grant used Pullman’s home and island as a summer retreat. The visit resulted in significant media attention, popularizing Castle Rest and the Thousand Islands region to national and international tourists alike.

Ina Isle is the property of Harold Fulmer of Allentown, PA, an owner of a series of radio stations, and one of the original investors in the McDonald’s Corporation. The island’s most notable features are the two cannons resting on the lawn. The cannons, which were used during the War of 1812, were drawn up from the bottom of the St. Lawrence River several years ago. The mansion also boasts an impressively large boathouse. In the early 1900’s, it contained a nightclub and dance hall, but both were shut down in the 1950’s due to reports of illegal gambling. Now, the second floor of the boathouse holds a regulation basketball court! You could say Mr. Fulmer’s purchase was a slam dunk.

Need a Life Saver? Head to Red Stone Island! The island was owned by E.J. Noble, a millionaire and philanthropist who has made his fortune and solidified his legacy in a variety of ways. In addition to donating money for the Alexandria Bay hospital and two other medical facilities in the region, Noble also took over his brother-in-law’s failing candy business, rebranded the sugary treats, punched a hole in the center so children wouldn’t choke, and launched Life Saver candies. A diversified businessman, Noble also owned significant stock in Paramount Pictures, ABC Broadcasting, Beech-Nut Foods, the Rexall Drug Store Chain, and the Canada Steamship Lines. He is said to have been one of the wealthiest men to pass through the Thousand Islands. 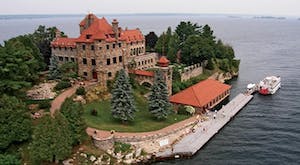 While most of the mansions in the region are private properties, there are two castles that are open for public tours. One of them is the mysterious Singer Castle on Dark Island. Dark Island was purchased by Frederick Bourne in 1902 as a family hunting retreat. The castle, which was built in 1905, was originally known as The Towers, but earned its colloquial name from Bourne himself, who was the fifth President of the Singer Sewing Machine Company. The Bourne family sold the property in the mid 1960’s to Reverend Martin, who transformed the castle from a luxurious summer home into a religious retreat. The once vibrant property fell into a state of shrouded mystery, and over time, rumors of hauntings began to emerge. After all, who knew what was happening in the damp dungeons and dark underground passageways below the foreboding castle? Finally, in 2005, a group of German investors purchased the property and reopened it for public tours and luxury stays. To explore the castle for yourself, consider taking the Singer Castle Tour, offered by Uncle Sam’s Boat Tours. The three hour tour will take you from Alexandria Bay to Singer Castle via an 11 mile section of the St. Lawrence River that is rarely navigated by other cruise ships. The tour also includes a stop at the other famed castle of the Thousand Islands, Boldt Castle. 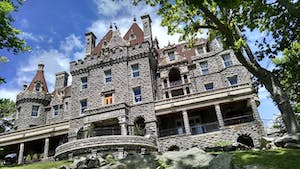 The story of Boldt Castle is one of true love and deep heartbreak. Built on the romantic Heart Island, Boldt Castle was intended to be a gift from George Boldt, famed New York City and Philadelphia hotelier, to his beloved wife Louise. Boldt had purchased the land in 1896 after the couple had spent several lovely summers in the Thousand Islands. After falling in love with Alexandria Bay and the surrounding Thousand Islands region, they began construction on the Castle in 1900. Sadly, Louise Boldt passed away mere weeks before her husband was set to complete his beautiful gift and, devastated by loss, George ordered construction cease immediately. The castle was left unfinished, unfurnished, and abandoned for over 70 years, changing hands and falling victim to vandals over time. In 1977, local authorities took charge of the property. They restored the castle and grounds to their original glory and opened Boldt Castle to the public so lovers, like George and Louise, might wander the halls, garden, and tower, to find a Boldt-like romance of their own.

Though it’s not a millionaire’s mansion, the Swiss Chalet earns an honorable mention for its fun backstory. It was built by George Boldt to house the Swiss architects he hired to assist with the construction of Boldt castle. He knew the architects would need to work on the project for quite some time, and he didn’t want them to get homesick!

As if the natural beauty of the Thousand Islands wasn’t enough, Millionaire’s Row gives visitors even more to gawk at. For a full tour of these only-in-your-wildest-dreams island homes, take an Uncle Sam Boat Tour. Aboard a comfortable two-level cruise ship you will tour the St. Lawrence River, crossing into Canadian waters to see even more unbelievable sights, and you will learn all about the islands, the glorious mansions, their millionaire owners, and the rich history of the region from a knowledgeable guide. One of the only boat tours in the region that offers stops at both Singer Castle and Boldt Castle, Uncle Sam Boat Tours offers the full two-nation experience without you even needing a passport! Spend a summer day floating in the Thousand Islands, and see what you could buy when you finally win the lottery.