A short history of Boldt Castle in the Thousand Islands 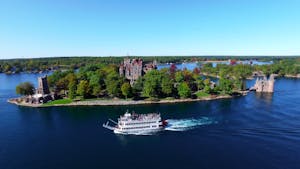 Boldt Castle has been one of the premier destinations in the Thousand Islands as long as anyone can remember. Today it is famous for its tragic love story and as a window to life during America’s Gilded Age. Thousands of tourists visit each year to take advantage of summertime in the Islands. There is much to see and do here but Boldt Castle has become synonymous with vacations as a jewel in the crown of what the Thousand Islands has to offer.

The historic summer home was built by George Boldt for his wife, Louise, between 1900 and 1904. It was an ambitious endeavor even for George, who oversaw the construction of monumental hotels such as the original Waldorf Astoria in New York City and Bellevue Stratford in Philadelphia. But this project was different, it was a physical manifestation of George’s love and devotion to Louise and his children. It was also a symbol of his success and power that he had accumulated during his career as a hotelier. Unfortunately, fate had other plans for George and Louise.

The Boldt Family purchased Hart Island from the estate of Senator E.K. Hart for $10,000. George’s first change was a simple one, that of the spelling. The addition of the “e” making it Heart Island would become a theme throughout all of the Boldt’s construction here, even reshaping the island itself to more resemble a Valentine’s Day heart. George began building around his purchase immediately. First, the Yacht House, followed by the Arch,  then the Alster Tower (Children’s Playhouse) and lastly, the Powerhouse. Then, in the Fall of 1899 the original home on the island was disassembled and rebuilt on Wellesley Island. This made room for construction of George’s ultimate vision, a lavish castle atop the island. It would be the largest, most technologically advanced and impressive home in the entire Thousand Island’s region. A proper summer home where he, Louise, and the children could spend their summers away from the overcrowded and polluted cities.

Construction moved along well, they watched as the elaborate home grew over the next few years. Louise’s health became an issue for the family in 1902. It’s believed she had been diagnosed with tuberculosis and was placed under the constant care of a doctor. Construction continued and the castle was on schedule to be completed on the date of the Boldt’s anniversary, June 14, 1904. But Louise’s health continued to falter and she passed away on January 7, 1904. George was heartbroken at her passing, immediately sending a message to Heart Island reading: Stop all work, Louise has died.

George continued to spend his summers in the Thousand Islands at his farm on Wellsley Island but he would never return to Boldt Castle and Heart Island. In 1916, George passed away while staying in his suite at the Waldorf. His children, George Jr. and Clover, took over his holdings. Clover partnered with Edward J. Noble in an attempt to make use of the castle property but the deal fell through and Clover sold her half of the island to Noble. Noble however did not really have a plan for the castle property. At this point it had already fell into disrepair and the task of rehabilitating it was a questionable investment. Instead he opened the Island to tourists who wished to visit the magnificent property to dream of what could have been. This continued for many years, and with only minimal work being put into maintaining or securing the property it began to crumble. Guests began writing their names on the walls or chipping plaster loose to take home as mementos. Local teens would sneak onto the island after dark to play hide and seek. But most devastating was the weather. Decades of hot summers and frozen winters began to do more and more damage every season. Eventually water would pour into the interior of the building during a rain storm, destroying plaster, woodwork, flooring and anything it touched. By the mid 1970’s the castle was becoming a dangerous place.

Heart Island was now in the hands of the Noble Estate and was being leased and operated by another company offering tours to those who dared visit. At the time guests would return every so often to see what more damage had become of this once proud building. In what was a last ditch effort to save the island’s structures from total collapse, the Noble Estate began searching for an organization who might stabilize some of Heart Island. The Thousand Islands Bridge Authority took interest in the offer and in the Fall of 1977 took ownership of the entire Boldt estate. No money was exchanged, however the Thousand Islands Bridge Authority (TIBA) agreed to operate and maintain Boldt Castle as a non profit organization in hopes of continuing the tradition of tourism at Heart Island.

The Spring of 1978 saw TIBA’s first opening day at Heart Island and some much needed changes to its operation. Most notable, a maintenance crew to begin arresting the damage to the buildings. At night, a security guard patrolled the grounds as well, keeping unwanted guests from the property. Year after year improvements were made, windows replaced, leaks plugged, and masonry repaired. By the early 1990’s the Main Castle was again stable enough that some rooms could begin to be rehabilitated. TIBA began with a single room, and then almost every year another was completed. Today the progress makes the castle almost unrecognizable to those who visited in the 60’s and 70’s. And guests return year after year not to see the damage but what places on Heart Island have been newly restored.

Today the Thousand Islands is a popular destination as it’s ever been. Offering beautiful vistas of green islands surrounded by blue waters, with the occasional freighter navigating the narrow passages of the Thousand Islands. While Boldt Castle is the best known Gilded Age home in the region there are many more sights to see. There is even another castle on Dark Island known as Singer Castle. But there are hundreds of amazing summer homes here, some built in the 1900’s and others still being built today, places like Eagle Point Estate. Uncle Sam Boat Tours has become a favorite tradition for visitors to the region as well. They offer several tours out of the Heart of the Thousand Islands, Alexandria Bay, NY. Their docks are directly across the channel from Boldt Castle, making them the only company that allows guests to stay as long as they wish at Heart Island. Uncle Sam Boat Tours provides shuttle service to and from Boldt Castle every 30 minutes. In continuous operation since 1926, most first time visitors take the famous 2 Nation tour which takes tourists through the island region on both the US and Canadian sides of the St. Lawrence River. But don’t let the border crossing scare you, you wont need a passport to see Canada aboard any of their cruises!

Today the Thousand Island Region is as beautiful a destination as ever, hosting weddings and events from all over the world. And Alex Bay is truly at the heart of this destination. Its central location is the perfect place to branch out and explore the region’s many offerings. Wineries, distilleries, historic homes, hiking, great dining and shopping are all short drives or even walking distance if your staying near the downtown area. But don’t forget a stop at Heart Island is almost mandatory for those wishing to experience all the region has to offer!